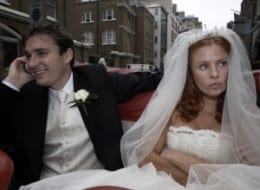 Thanks to Arnold Schwarzenegger, John Edwards, and now Anthony Weiner, infidelity has been making headlines—and people are reexamining their own relationships.

The Pew Research Center recently found that 40 percent of Americans think marriage is becoming obsolete. Another recent Pew study found that Millennials (people age 18 to 29) say they think that being a good parent is way more important than having a good marriage.

Once considered an imperative of sorts, traditional marriage is getting a second look—and research suggests that it may be coming up short. Instead of considering themselves to be happily married, some people are discovering that they’re only “semi-happy,” and their quest for fulfillment can lead them to extramarital affairs and divorce.

A semi-happy marriage is one of low conflict, low passion, and low satisfaction. “One minute, you love the stability and contentment. The next minute, you think it’s not the right marriage, and there are flaws in the marriage that are serious, even though there are also great things about the marriage,” says historian Pamela Haag, author of “Marriage Confidential: The Post-Romantic Age of Workhorse Wives, Royal Children, Undersexed Spouses, and Rebel Couples Who Are Rewriting the Rules. In other words, “one minute you can’t imagine staying, the next you can’t imagine leaving,” Haag says. “It’s these kinds of marriages that are ‘low-conflict’ but not all that satisfying that contribute the lion’s share to divorce court each year.”

Her own 13-year-long marriage almost fit the bill. “Often, in my own case, I really can’t tell if my marriage is woeful or sublime,” she writes in her book. “Maybe I’m just so profoundly content that it feels like unhappiness, because nirvana is dull in this way, it lacks frisson.” (She adds that she thinks her husband is “an amazing sport, and brave, to let me write about this topic of mixed feelings at all, even though a good number of husbands and wives have mixed feelings.”)

Boredom can also cause major marital problems. A national survey of 3,341 people by advice website Good in Bed and Kristen Mark of The Kinsey Institute for Research in Sex, Gender, and Reproduction found that 25 percent of people are bored in their current monogamous relationship, and another 25 percent admit to being “on the brink” of boredom.

“Boredom is basically like an attack on a relationship’s immunity system,” says Ian Kerner, PhD, founder of Good in Bed and author of “Love in the time of Colic: A New Parents’ Guide to Getting It On Again. “It’s not a coincidence that a fifth of respondents admitted to being unfaithful to their partner as a result of being bored.”

While most of the women Haag interviewed said they felt lonely in their semi-happy marriages, men told her that they felt “trapped” or “penned in.” It didn’t seem to matter if they married “too young” or waited until they were older; what mattered was what people expected from their marriages. And for many, the traditional blueprint that their parents followed is simply no longer a good fit.

“My generation—people in their 30s, and 40s, and early 50s—are perhaps caught betwixt and between the old romantic ideals and the new post-romantic expectations,” she adds.

Haag emphasizes the fact that she’s a historian and not a marriage therapist, and says that she does not “endorse a particular marital style.” In her book, she explores several suggestions for “forging a third way between melancholy persistence and divorce,” ranging from slightly outside-the-box (rewriting your vows to more accurately reflect your life as it is now, for instance, or sleeping in separate bedrooms) to the extreme (redefining marriage as a temporary parenting agreement or giving the green-light to discreet extramarital affairs, among other things.)

Even so, people can still end up feeling only semi-happy. “There’s a part of your soul that isn’t nourished in marriage, and it’s too big a part to live without,” Haag writes. “You’ve tried, but you fear that you’re in the wrong marriage, however wonderful your spouse may be.”